by Davina | - Articulate your Answer (So What), - Grouping storylines, - Project Management, - Stakeholder Management

Have you been in a position where you must implement a solution that you disagree with?

This is the situation Anya found herself in recently, which set up a great discussion around trade-offs, politics and what to do when your CEO is one of your objectors.

In tonight’s working session we helped Anya craft a story that has some useful lessons.

In sum, respectfully documenting disagreement can place responsibility where it belongs while also providing one last chance to reverse the decision.

Disagreement can be respectful

We played around for quite a while to work out how to present this story so that it both gave the leaders what they were insisting upon while explaining the costs of this approach.

Part of the difficulty in crafting a story like this is the emotional frustration that can get in the way. As Anya said, she had expected to sit down over the weekend with a couple of gins and tonic to work out what to say to her leaders.

The reason it felt difficult is that she was feeling the heat of a poor decision that would be costly and time consuming to implement in comparison with her preferred solution.

Laying out the trade-offs for the leaders gave her an opportunity to pass the responsibility for those trade-offs back up the chain to those who were making the decision.

If the reports were costly or late, it would no longer be her problem.

Leaders are charged with making decisions with the whole organisation in mind, which can lead to unpopular decisions. Sometimes, however, these decisions can also be ill informed simply because they are not close enough to the trade-offs incurred.

This is where a delicate effort to convey those trade-offs while respecting someone’s position is essential to return the responsibility for the costs of a decision to the decision makers.

Tonight we took two steps to achieve that. We

I have laid out the storyline below for your use, but do encourage you to check out the recording further down. It was a great conversation.

I hope that helps. More next week. 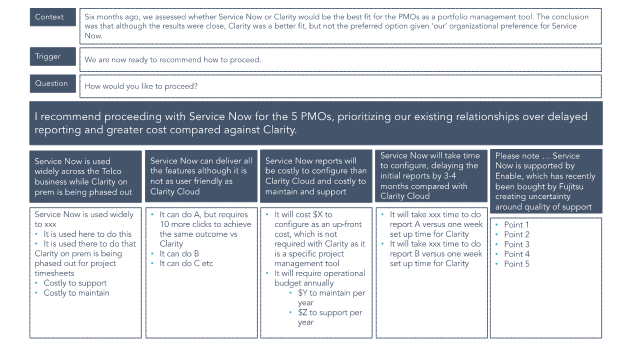 EXERCISE: Rewrite this invitation so your grandma could understand it

This week we worked on an email and ended up discussing another truism that can be very hard to execute on.

This morning’s one was: ‘Write it so your grandmother could understand it’.

As an idea it is both good and infuriatingly difficult to execute on.

How to do that?

The key to this morning’s example was to focus on the substance of the message, rather than on the ‘process’ required to gain accreditation.

Here are two steps to take to transfer the learnings into your own work:

In general, focus more on the ‘why’ …

Practice this by leveraging the example we used in the working session.

I hope you find that useful.

Have a great week. 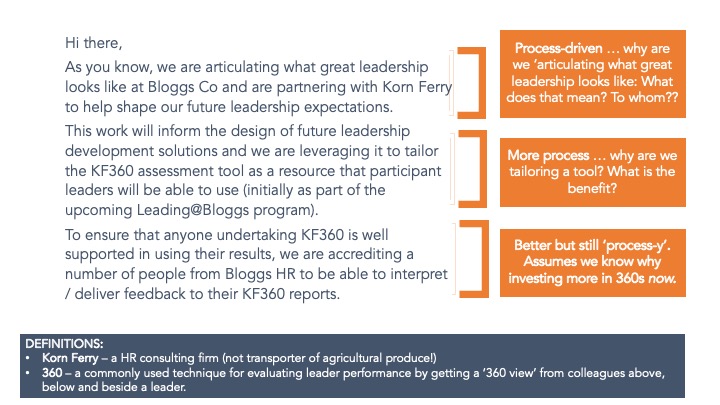 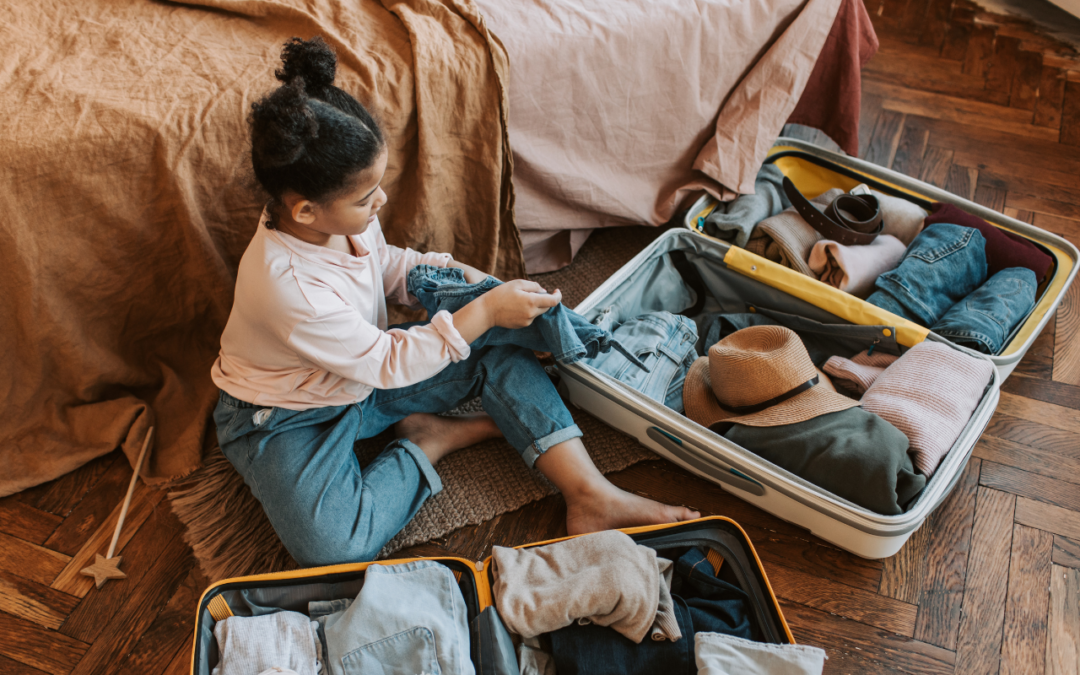 Do you wonder if every story you need to convey ‘fits' within one of our seven patterns?It may shock you that I don't think they will!I do think the patterns are a fabulous guide, but encourage you to use them as a starting point that enables you to finesse them using the core storylining principles.But … how to do that?I suggest you ‘hack' your structure first using our storyline planner as a guide and then tweak using first principles. Here are some thoughts on how to make that work for you:Step 1 – Use the planner for all major communication! Work through this process from start to finish so you land your messaging before you waste time editing and potentially rewriting a lengthy document.I was reminded of the importance of this when – not joking – I was packing my bags to return from the US last week. It was so much easier to pack for the return trip than it was on the way out. The bag was also much more neatly packed. Why?On the way over I was packing quickly for an uncertain environment. I didn't know what the weather would be like and wasn't sure whether I needed only casual gear or more formal also.As a result, things went in and out as I worked it through.The process was I think a bit like working out what ideas fitted into a storyline.So … I can't emphasise enough the importance of landing those messages first.Step 2 – ‘Hack' at least two high-level structures for your story. Be guided by the So What Strategy book (pages 50 and 51) or your desk reference. Pick one and ‘fill it in' inside the planner using your own material but copying the structure.Step 3 – Tweak these high-level, skeletal structures as needed making sure you stick to the overall storylining principles. This means that whether the story veers away from the chosen pattern, it still includes
Step 4 – Prepare your communication, following the storyline structure to ensure your document conveys your thinking as clearly and concisely as possible.
I thought a schematic of the different generic structures might help so have included it below.>> Download the reference here.I hope that helps. More next week.Kind regards,DavinaPS – We will be opening the doors for new participants soon. Here is the latest brochure (refreshed today!) in case you would like to tell your friends and colleagues about the program. 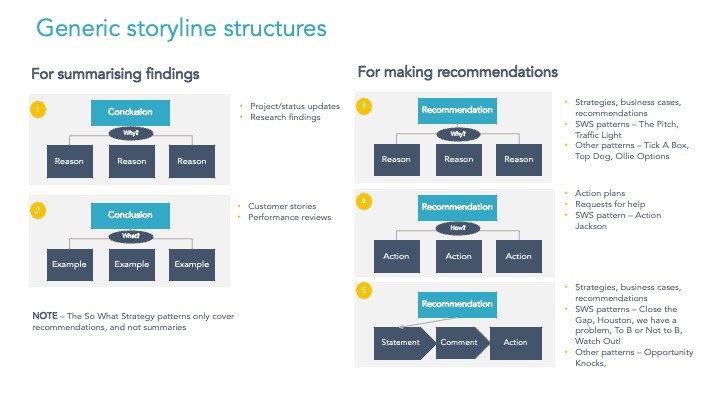 I am often asked a question that goes a bit like this: “How do I use a storyline when I can't or don't need to offer a recommendation?”

There is at times a concern that storylining isn't fit for purpose in this setting.

We saw a terrific example of this play out in a December coaching session, which I'll unpack here for you.

The easy answer is that although we don't offer a pattern for this, you can easily use a storyline to provide a summary at the top and supporting levels.

“We recommend adding Aristocrat (ALL) into your investment portfolio”
as this could be out of the scope of the work you have been engaged to do.

If you were to take this approach, the supporting points would be reasons, explaining why you recommend adding ALL to the portfolio. You would most likely use a version of the Pitch Pattern.

However, in some settings this is prohibited or unwanted. Your financial services license may not permit you to offer ‘advice', or your client may have specifically asked for your findings only.

If this is the case, you might offer a summary (akin to an ‘observation') that says something like this:

“ALL's acquisition of Playtech opens new avenues of growth and an early EPS uplift given the financial structure of the deal.”

This describes what has happened in the past quarter without saying ‘buy this stock'.

If you were to take this approach, the supporting points would still be reasons, but would put forward a different kind of argument. They would be explaining why it is true, or what evidence you have, to support the idea that the acquisition opens up new avenues of growth.

In either case the supporting points could follow a classic Grouping Structure.

You can download the example and/or watch the video of this session below.